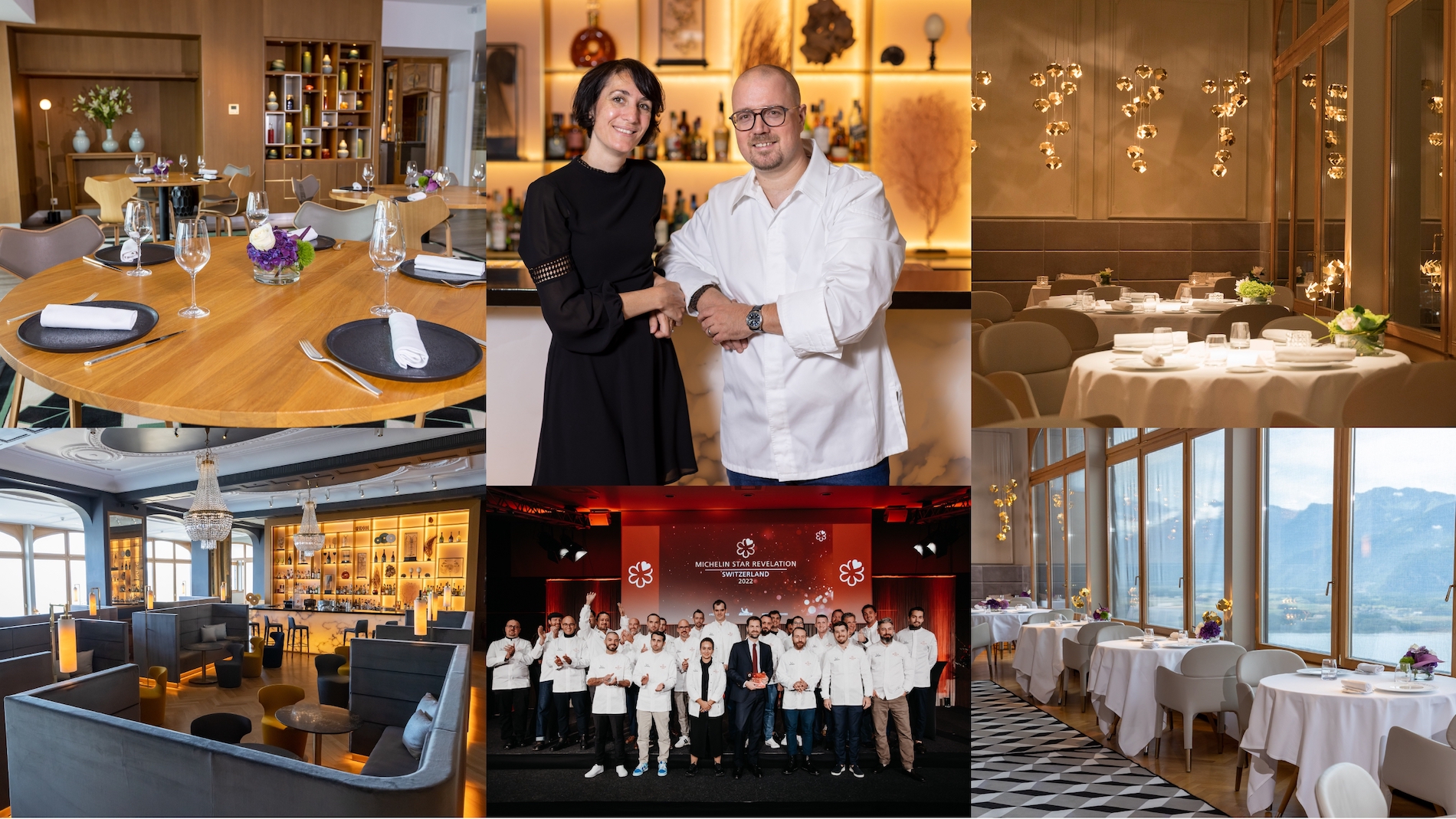 Glion (Switzerland), October 18, 2022 - The prestigious Michelin Guide, created in 1926, has just awarded 1 star to Stéphane Décotterd for his "Stéphane Décotterd" gastronomic restaurant as well as 1 Bib gourmand for the adjacent “Le Bistro by Décotterd”. This award reconfirms the Chef’s exceptional creative talent and his consistent high standards. Since September 2021, his restaurant has been located at the heart of Glion Institute of Higher Education, which has thus become the only higher education institution in the world to host a gastronomic destination embodying this level of excellence.

This year, Swiss gastronomy shined during the ceremony presenting the guide's annual selection establishing a record year in number of stars and new restaurants being listed. The guide highlighted the diversity, know-how and innovative spirit of local restaurateurs, describing the development of Swiss gastronomy as remarkable.

The prestigious Michelin Guide has awarded Stéphane Décotterd 1 star for his gourmet restaurant “Stéphane Décotterd”.  Opened in September 2021 in the heart of Glion Institute of Higher Education, the "Maison Décotterd" comprises three culinary areas – the gastronomic restaurant, the bistro and the lounge bar – which together form a culinary destination above Montreux with spectacular views of the Alps and Lake Geneva. The restaurant, housed in the legendary 19th century Bellevue Hotel, a listed building, is a combination of modernity, chic and Belle Époque style.

Glion Institute of Higher Education thus becomes the only Education institution in the world to house a gourmet restaurant as well as a Bistro awarded by Michelin and a chef of this caliber, allowing students at the prestigious school to gain experience in the most demanding areas in the world of haute cuisine.

Stéphane Décotterd shared upon receiving the award. "It is a great honor for me and my team, a reward for the enormous commitment we have made over the year, as well as a recognition of our efforts to carry out the ambitious ‘Maison Décotterd’ project.” His philosophy of focusing on regional produce and giving preference to producers in the region has made him one of the pioneers of haute gastronomie in Switzerland. Customers can thus discover salmon from the Grisons, asparagus from Salquenen in the Valais, pike from Lake Geneva and Swiss Angus beef from Lucerne on the menu.

The guide presents the Bistro as the alternative to the gastronomic restaurant to dine in simplicity but with “great savoir-faire” and with the same outstanding views. The Bib Gourmands award addresses with the best value for money.

"We are honored to have ‘Maison Décotterd’ at the heart of Glion. This is a unique opportunity for Glion students to be inspired by the Chef and its team, exceptional culinary talents" said Dr Michel Philippart, Managing Director, Glion. The first-semester Bachelor students spend indeed four weeks at Maison Décotterd – alternating between the gourmet restaurant and its kitchen, the bistro and the bar.

Maison Décotterd is a member of the Relais & Châteaux association which is synonymous with excellence, and is thus part of a worldwide network of 580 first-class hotels and restaurants.

Stéphane Décotterd was born in Billens in the canton of Fribourg and grew up in Corseaux and La Tour-de-Peilz near Vevey. He considered becoming a chef from the age of ten and started his apprenticeship right after school at "Le Petit" restaurant in St-Légier. After working in a few other restaurants, including Le Pont de Brent, and in Quebec, Canada living for two years, he returned to Switzerland in 2005 to set up at Le Pont de Brent. In 2008, he won the "Cuisinier d'Or" competition, the award for the best Swiss chef.  In 2009, he was fifth in the world at the Bocuse d'Or, an artistic cooking competition in Lyon (France). In 2011, Stéphane took over the reins of the "Pont De Brent" with his wife Stéphanie. In 2012, the couple was awarded two stars in the Michelin Guide and an 18/20 rating in the Gault-Millau. In 2018, the Chef abandoned seafood, exotic fruit and other imported products to devote himself solely to an eco-responsible cuisine that promotes local products and terroirs. In 2020, the Chef was awarded the "Ethical Cuisine Trophy" in London by the Relais & Châteaux association, and in the same year he received the "Swiss Culinary Merit" award for his excellence and know-how in respecting Swiss culinary heritage products.  He is also a member of the "Académie Culinaire de France".

About Glion Institute of Higher Education:

Founded in 1962, Glion Institute of Higher Education is a Swiss institution offering bachelor’s and master’s degrees in hospitality, luxury and finance to an international student body across three campuses in Switzerland and London, UK.

Glion is ranked among the world’s top five higher education institutions for hospitality and leisure management, and in the top three number for employer reputation since its entry in the ranking in 2018. (QS World University Rankings by Subject, 2022).